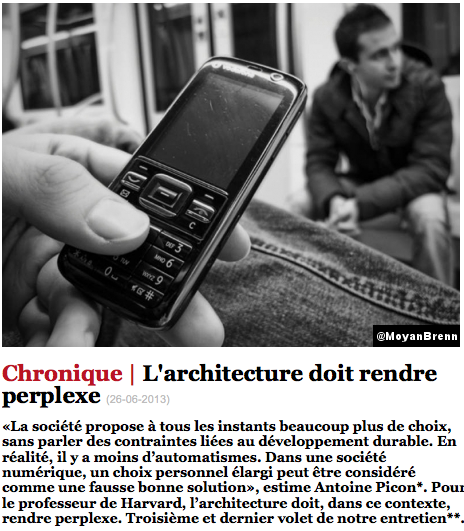 Article published in the Mail of the architect: http://www.lecourrierdelarchitecte.com/article_4689

"Society offers a lot more choice at all times, not to mention the constraints of sustainable development." In reality, there are fewer automations. In a digital society, an enlarged personal choice can be considered a false solution, says Antoine Picon *. For the Harvard professor, architecture must, in this context, be perplexing. Third and final part of our interview * *.
Claire Bailly and Jean Magerand: What is the relationship between the digital world and the world of sustainable development? Are the links starting to weave? Antoine Picon: I think we are in a paradoxical time. Sustainable development is both a promise and a danger, especially because of the scientific risk. Architects need to demonstrate their usefulness and are ready to become the engineers of sustainable development. But in my opinion, architects are not engineers. I believe that to save the world, you have to be an engineer. To give it meaning, you have to be an architect. That said, there is a need for the evolution of architecture. It is a question of better taking into account the energy aspects like the different cycles of materials… It seems obvious to me that this development can only be done with digital, for one simple reason: most of the issues related to sustainable development have a strong information component. Energy consumption data must be available to improve energy exchange. To manage the life cycle of materials intelligently, it is necessary to ensure both their provenance and their destination. Sustainable development goes through a lot of information. It is therefore necessary to be connected to the digital, which influences the societal as technology giving a form of power to individuals. Sustainable development is based on a number of individual behaviours: how to heat, manage garbage, etc. And, in this context, architecture? The architecture remains schizophrenic. There are those who make the algorithm and those who are interested in the cycles of materials or the exchange of energy in the envelopes. Nothing is taught in a concerted manner. In general, one hires either a computational or a "sustainable", i.e. members of two different tribes. It is a real problem that is certainly not really new. The structure and the project have never been properly taught in architectural schools, especially since these areas are disciplinaryally carved. In the case of sustainable development, this separation is particularly troublesome and hybridization, either in practice or in teaching, is now necessary. I think that, for many reasons, we are only at the beginning of sustainable development. For the moment, on many topics, debates are more ideological than technical. For example: Are the towers durable? In reality, no one knows because, by definition, density is complex and refers to problems of systemic modeling. A particularly dense city may require the importation of services from far away. We must therefore be part of problems of exchange, information, materials, energy, sometimes difficult to master. The digital has resulted in some epistemological changes. Here too, we are at the very beginning of a transformation of the modes of reasoning. The architect still tends to think in terms of finite object; The digital, meanwhile, tends to facilitate the understanding of flows. Today it is a question of thinking that a building is part of a flow of scattered materials, temporarily stabilised the time of construction and then again separated on the day of destruction. What type of report do you see between the current and future project approach? In a world of flux, you have to think about the design of objects. It is not said that the whole architecture has to blend into such a mould. In any case, it will have to become more compatible. However, the architect must not only implement gradients and fluxes; The architecture also has a resistance function. It must be open to progress, integrating it but also maintaining a capacity for resistance in the face of progress. This sometimes leads the discipline to an excess of resistance; Architecture is also interesting in its inertia in the face of change.

is the current international architecture in resistance? Do the avant-garde exist? I think there are actually several contemporary architectures so the practice is diffracted. Between an expensive Zaha Hadid museum in a Middle West American city and a large ensemble in the suburbs of Beijing, is it about the same thing? I tend to think that we group together under the term architecture very different accomplishments. Being archaic is also a way to conform to what society expects of you. The star-architecture has perfectly archaic sides, much like the archaic practice of haute couture evening dresses. The role is the same: emblematic, symbolic, etc. It is a practice of author, of artists, of signature, all derived from aesthetic reflections. It is not without interest but it is still, in many respects, an archaic practice. This architecture, which in general does not necessarily correspond to the most essential societal stakes of the moment, is at the same time completely linked to the competition between cities and territories on a global scale, of which the Guggenheim of Bilbao is at the origin. In this case it is an artistic architecture which, at the same time, proves to be in solidarity with an urban and territorial strategy intended to rejoin the globalisation. This is both an archaic and a very contemporary approach. Overall, architecture is not at the end of its sentences. It will still have to evolve a lot. A social ensemble in China, now the result of a serial construction, is just as archaic at other scales. In any case, the architecture will always have archaic sides. On this subject, Le Corbusier, who was probably the greatest architect of the twentieth century, announced both a different world and kept a very artisanal practice. That said, the practice is transforming. We see for example a global movement to increase the size of the agencies for the first time in a long time. The structures of the profession are changing very clearly. The computer also makes it possible to have more important agencies. We are faced with a phenomenon similar to the Diesel engine * * previously mentioned. Some thought that the computer would allow everyone to be creative in their attic but, in fact, the computer is also becoming a tool for concentrating design.

From this digital world, will this architecture propose new relations between inhabitants and users? New ways to live, to communicate, to meet? It will not necessarily be paradise; It is more of a society offering at all times much more choice, not to mention the constraints of sustainable development. In reality, there is a lot less automation. In a digital society, an enlarged personal choice can be considered a false solution; Think of the number of options today on a mobile phone, for example. I think architecture as a mobile phone, just as programmable, can be a nightmare. Architecture must therefore find a good balance between what is programmable and what is imposed. Moreover, the amount of information to be processed is beginning to overwhelm us. The time has come for artificial intelligence to take over in a variety of areas. Take the example of my practice as a researcher: before, I was painfully accessing five articles on a subject, I read them. Today I can access without painfulness any to 150 items and suddenly I read them diagonally; I feel more and more drowning in information. What is true in my research practice is true for many other things. The time of the ' bots ' has come to carry out a pre-selection work. It is an issue that goes beyond even the architecture which will have to protect us from the digital overflow, as this one will get more and more confused with the atmosphere we breathe. One of the best ways to be comfortable with information is to confront it when it is transformed into an environment.

For example, in the street, we are bombarded with information but we know how to treat them as a medium. This is not the case when the information arrives as messages. Imagine that all these stimuli come to us in the form of SMS, we would be drowned! The body is a fabulous machine to integrate the information into a coherent whole. Today, no one still nervously cracks with the selective sorting but if tomorrow the ways of life impose us to be even more in a fine management, then we may need help to avoid the crisis of nerves. This will probably be one of the roles of architecture: facilitating integration. It takes both more artificial intelligence and an ambient environment, which must prove to be at least as much informational as it is sensitive. So everything remains to be done? The architecture tries to 90% to conform to people's expectations but there is no architecture if there is not 10% movement of the issue. This is undoubtedly one of the major differences with the engineer, of which we do not expect him to move the matter. Architecture must make users perplexed. The risk of engineering in sustainable development is probably too much to want to answer a question and forget to move it. In architecture, it is not enough to provide answers, you also have to present questions without a solution. It's a reflexive practice. That's why architecture has this ability to formulate assumptions. Interview by Jean Magerand and Claire Bailly * Antoine Picon, general engineer for bridges, waters and forests, is professor of History of architecture and technology and director of doctoral studies at Harvard (Graduate School of Design and Architecture) * * Read ALSO the first components ' to architects, duty to inventory ' and ' Post-History of Architecture: the digital revolution '.
Partager

(c) : Texts and pictures are not copyleft.